The Crown Bar, also called The Crown Liquor Saloon is probably the most popular Bar for visitors to Belfast. It is a Victorian Gin Palace owned by the National Trust and managed by Mitchells & Butlers plc.

The Crown Liquor Saloon in Great Victoria Street, Belfast is one of Victorian gin palaces which once flourished in the industrial cities of Britain. Today wonderfully preserved and owned by the National Trust, the Crown is still well used by the people of Belfast.

The Crown dates back to 1826, when the first train ran from Belfast to Lisburn. It was then known as the Railway Tavern and was owned by Felix O'Hanlon; he sold it to Michael Flanagan, but it was Michael's son, Patrick, who was destined to make it famous. A student of architecture, he travelled widely and was impressed by what he saw. He arrived home with ideas to brighten up the old family bar. 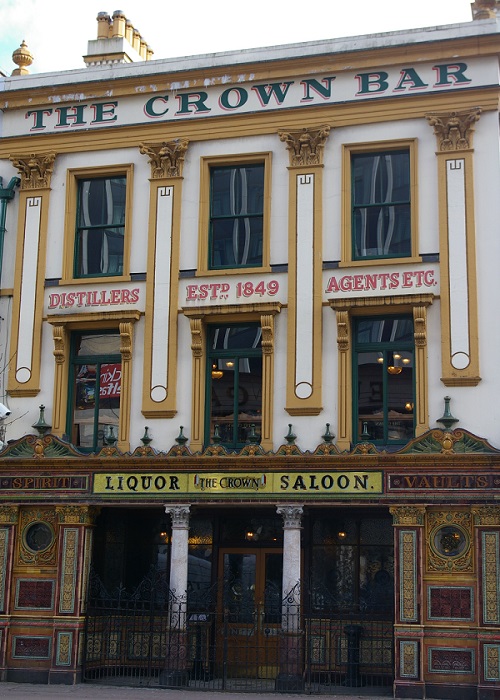 The Crown is both ageless and priceless, a gem of Victoriana and one of the great bars of the world. Formerly known as The Liquor Saloon in Great Victoria Street, it was one of the mightiest Victorian gin palaces which once flourished in the industrial cities of the British Isles. Dating back to 1826, it is now owned by the National Trust and has been sympathetically restored over the years.

The Crown remains a unique visual gem, a veritable masterpiece in bar architecture, which has the distinction of being known to millions the world over. The exterior facade of the bar is a riot of polychromatic tiles which clearly hint at the box of delights to be found within. At first sight the outside is so exotically overwhelming that one has difficulty in registering the fine detail work.

The Crown Bar is so unbelievably rich in colour and design that each time you go in you'll find something new to catch your eye that you may have missed before. Where else would you find a burnished primrose yellow, red and gold ceiling, a floor laid in a myriad of mosaic tiles, brocaded walls, ubiquitous highly patterned times, vigorous wood carving throughout, ornate mirrors, wooden columns with Corinthian capitals and feather motifs in gold with painted and etched glass everywhere you look.